I've had this card in the back of my head since the beginning of this month, when I saw the VivaLasVegaStamps September moodboard: green, black, splatters, skulls... Luckily the Stampotique Designers challenge took Halloween as a theme this week, so going for two challenges at once, I actually squeezed in the time to get this done! 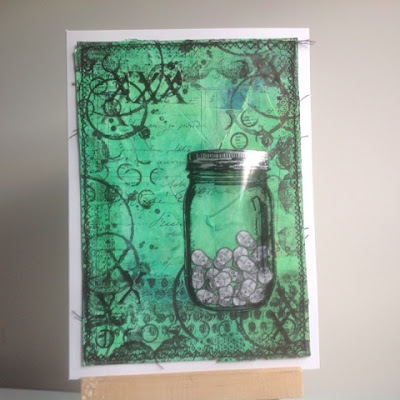 I wanted the mason jar (from Art Journey) to have a dimensional effect. I stamped it on the card base and on acetate. I masked the one on the card base and stamped around with all sorts of splattery spotty VLVS stamps. I cut the acetate out so that there are extra flaps along the straight parts of the edges. I cut slits for the flaps on the sides of the jar on the card. The flaps are on the outside of the jar outline, the slits on the inside... not many millimetres, but surprisingly dimensional! I coloured the lid of the jar from the back with a silver Sharpie.

I glued in a bunch of skulls. They are from my only skeleton stamp, VLVS steampunk skeleton, and have been covered with Crackle Accents. After glueing the pile in place I added some more grungy stamping and sewed several times around the card with black thread. I'm not really a Halloween person, and came to the conclusion that I don't have a suitable sentiment... But an image is worth a thousand words, so this will have to suffice :) 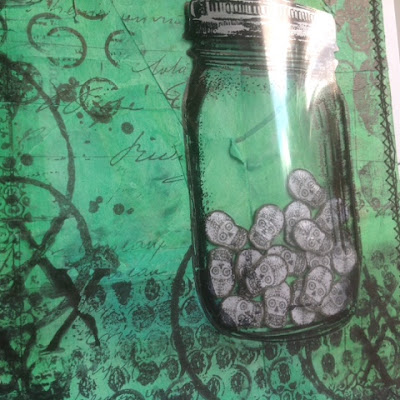