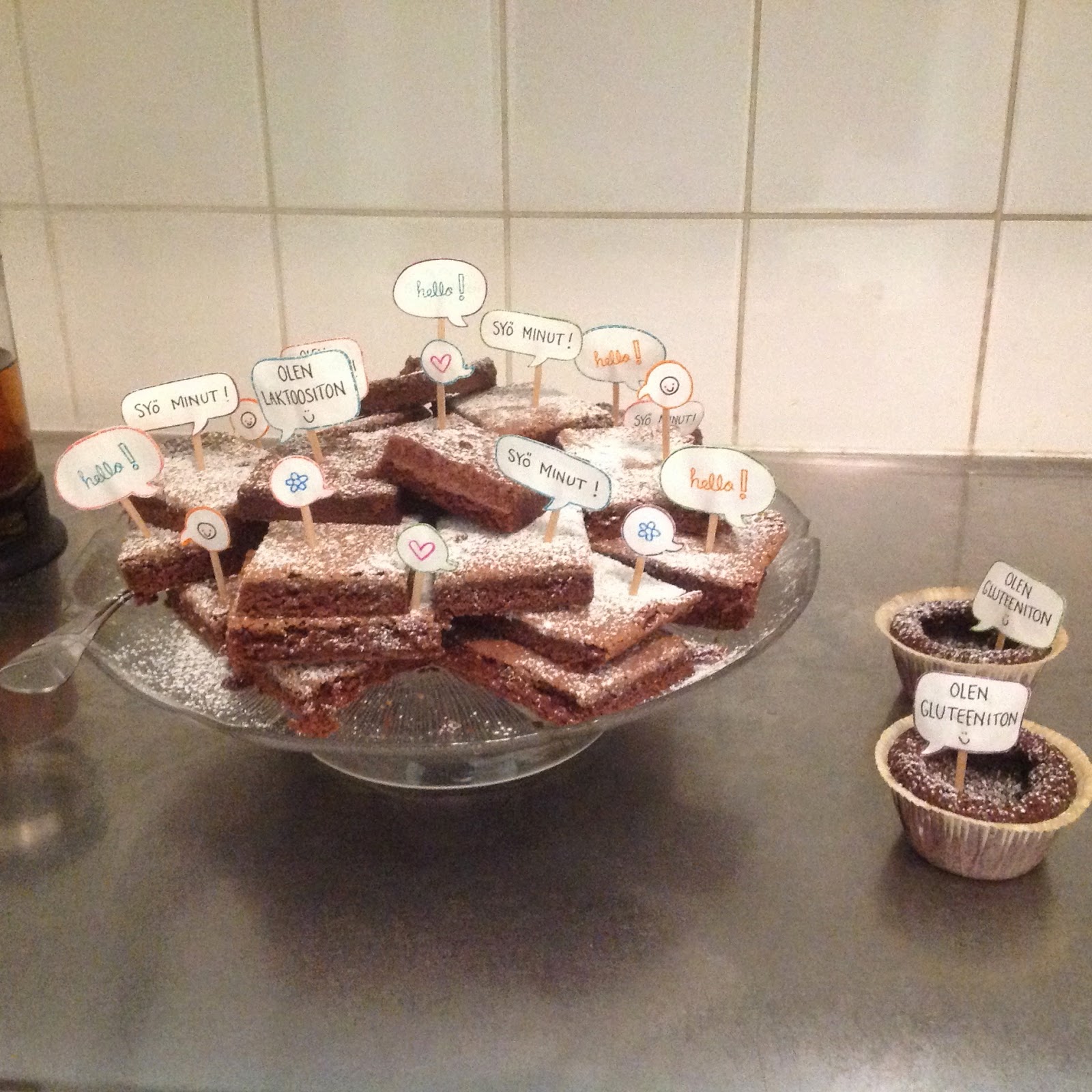 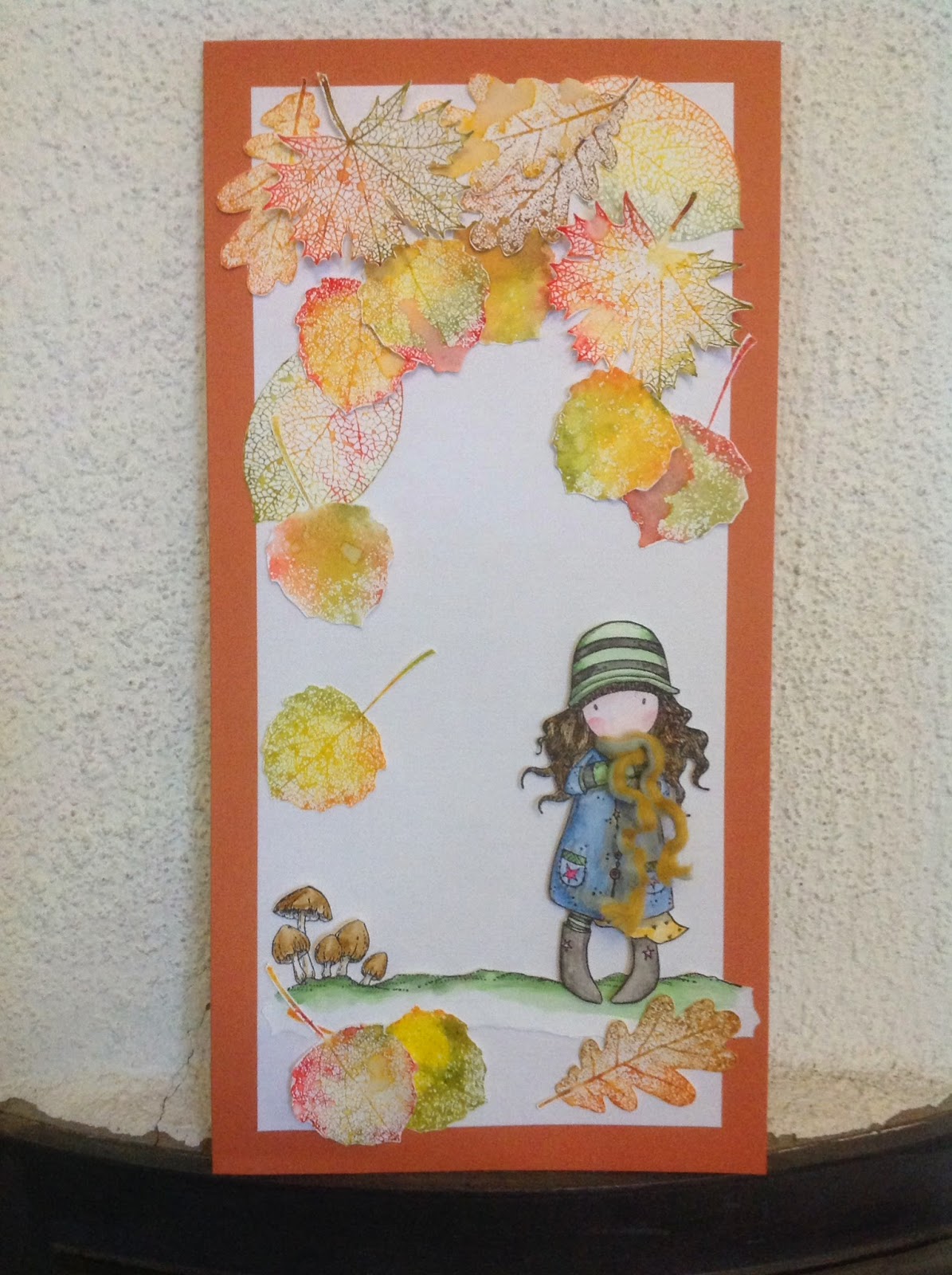 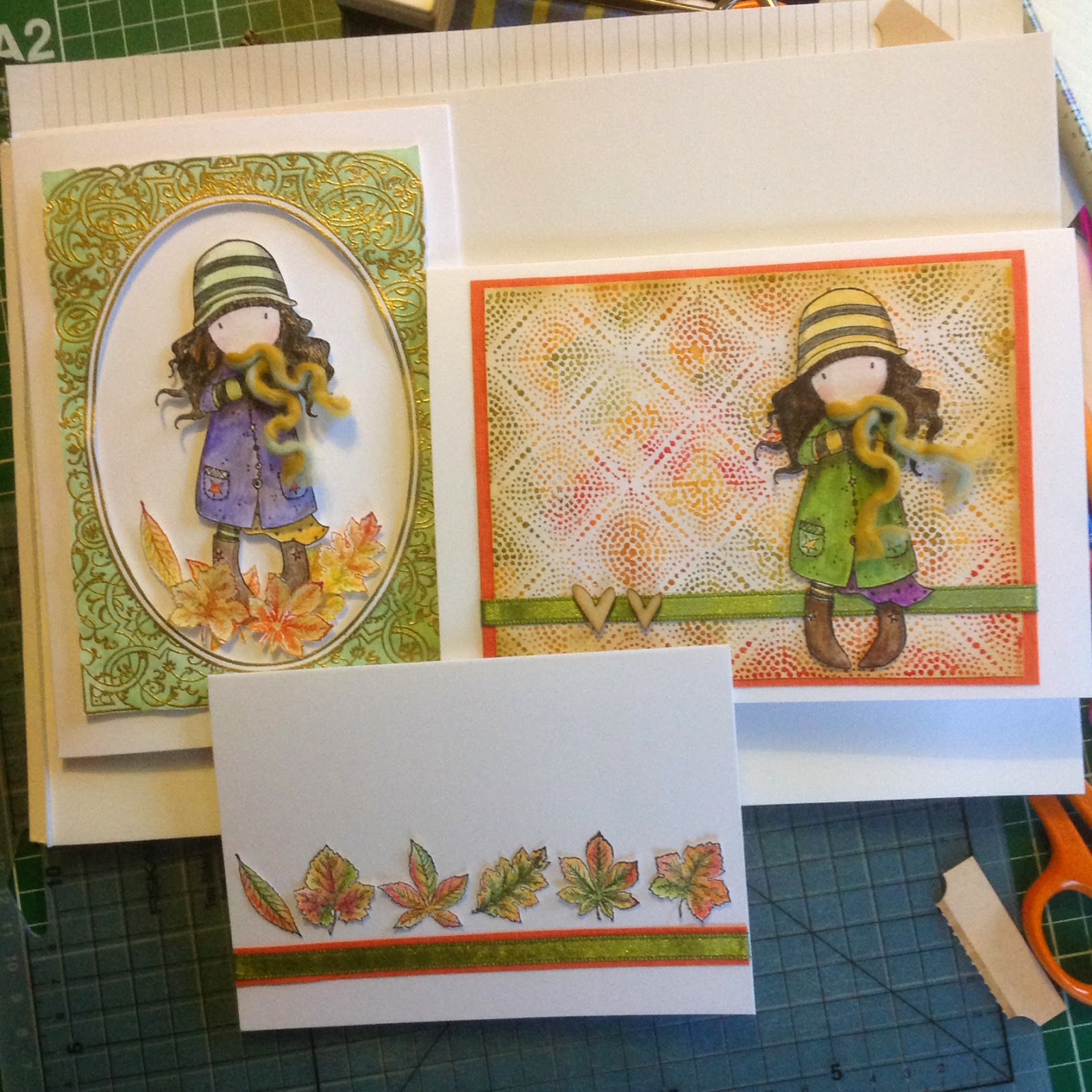 The Crafty Individuals October challenge Halloween madness or Christmas frenzy had me thinking about the quirky birds. They of course have their own quirky attitude towards everything that goes on, also Christmas!

In Finland everyone owns a bright red "elf-hat" with a jingle bell at the end. They are worn during the Christmas season at school parties and other Christmas events. And of course at home on Christmas eve while waiting to get to the gifts. 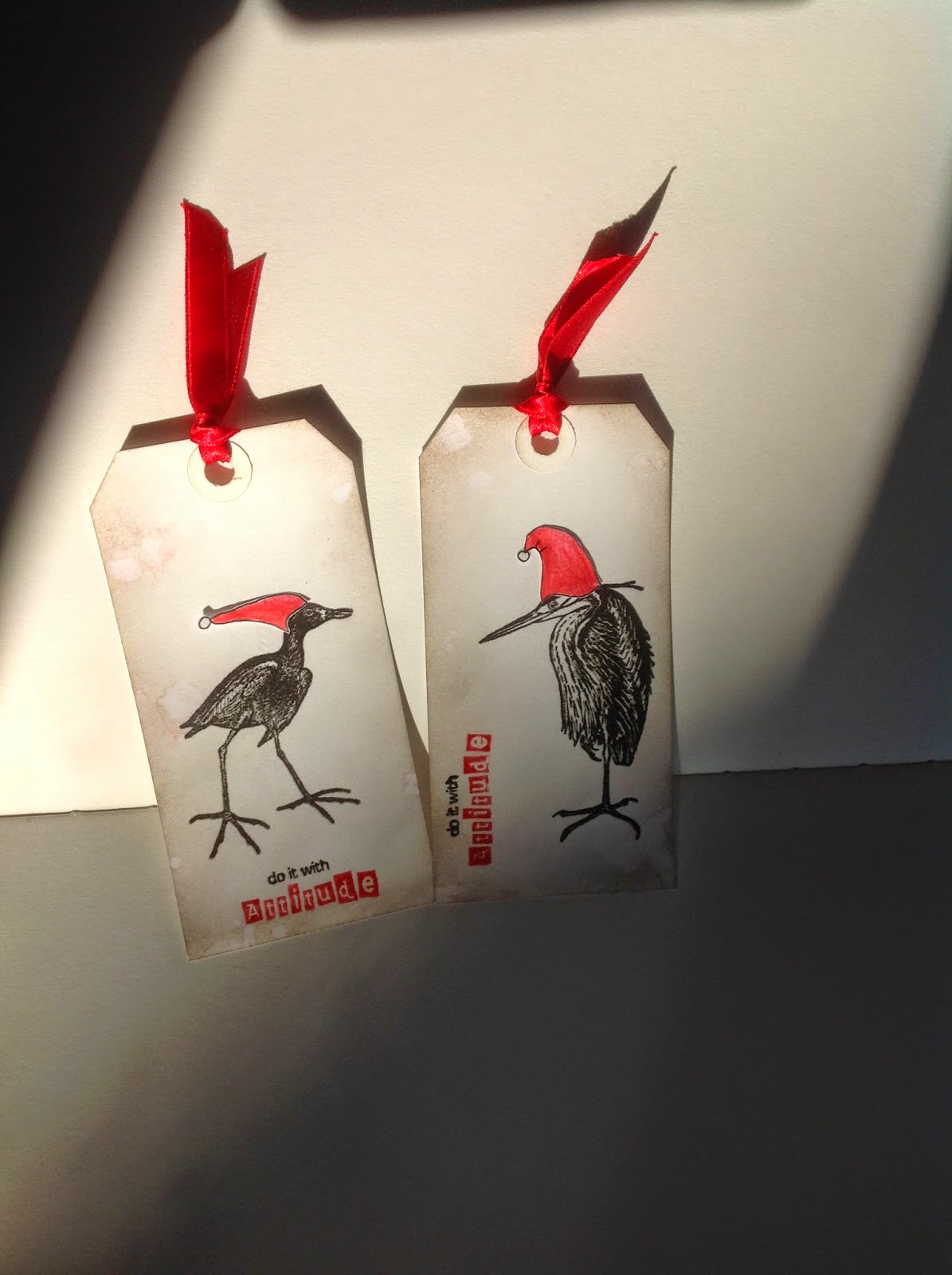 I did the stamping with Versafine Onyx Black (and some red Distress Ink). Everything was heat embossed with clear embossing powder. The tags were finished with Pumice Stone -Distress ink blotched with water, red hats drawn with Inktense pencils and some red ribbon. I could imagine these as fun Christmas cards too, perhaps changing the sentiment to Merry Christmas and adding a bauble to hang from the birds' beak. These I plan to give to some colleagues before Christmas together with a little gift.
Lähettänyt Unknown klo 17.07 3 kommenttia:

The house of Black Butterflies

I decided to create a blog and renew my entry for the Viva Las Vegastamps October challenge "Get your SPOOKY on" since the space I first posted on didn't work like I wished it would.

I'm no Halloween person, and would be ready to claim that I don't own any spooky stamps, but after buying an advent calender from a girl scout I started thinking of a Halloween calender card with shutters to open and spooky things inside. I did an inventory among my VLVS stash and found more suitable stuff than I had expected! This project is proof that a spooky effect can be achieved with cute stamps too, at least if they are heat embossed with black and painted with grey...

I used the center of my tree circle stamp as cobwebs, the line of grass as shabby curtains and butterfly specimen as roof tiles. I went through the stamps I got with a grab bag, and found a moon, a skeleton, a bug with bat wings (I mostly used only the wings), a tiny stamp with three ladybugs, a bird background, a dog face, a " STOP do not look inside" -note and an arch that would do for window shutters.

I scored a piece of grey 12x12 cardstock to make my card base, cutting the front into the shape of a house. I decided to go for the colour scheme of this challenge using grey and a splash of green. I ended up spending several days piecing this together, but it was fun and the result is cooler than I expected! Hooray for Halloween even though we don't really have festivities around it here in Finland :) 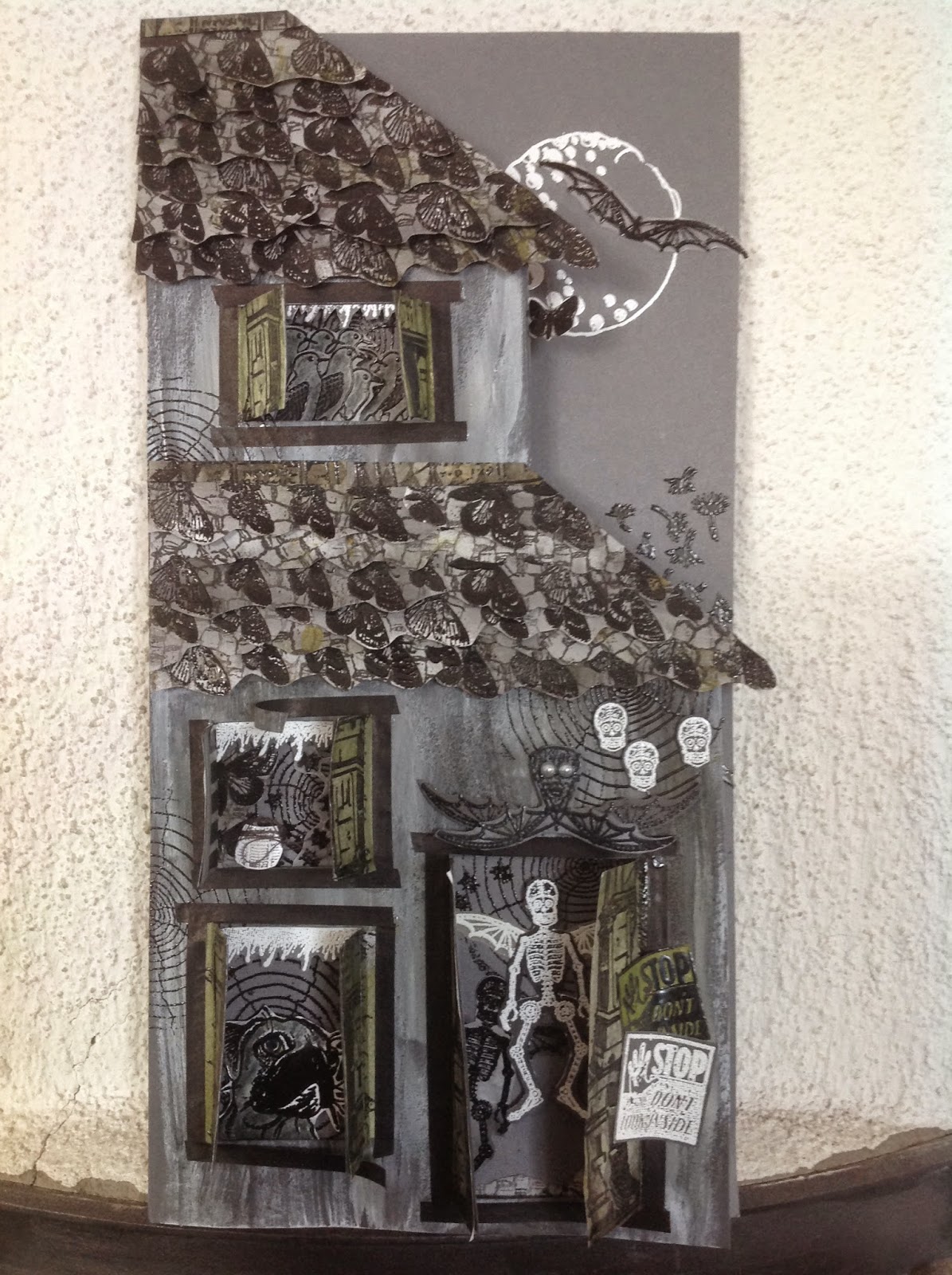 I started by cutting out an extra front piece and roof sections, and stamping loads of everything (especially butterflies) on scraps of white paper, grey cardstock and vellum. All of it was heat embossed mostly in black and washed over with black watercolour. I added some green spray ink and fussy cut the pieces. The moon was placed on the inside of the card, so it would show from behind the house. It had a face on it, but I did my best not to ink the features as I stamped with Versamark and heat embossed with white. 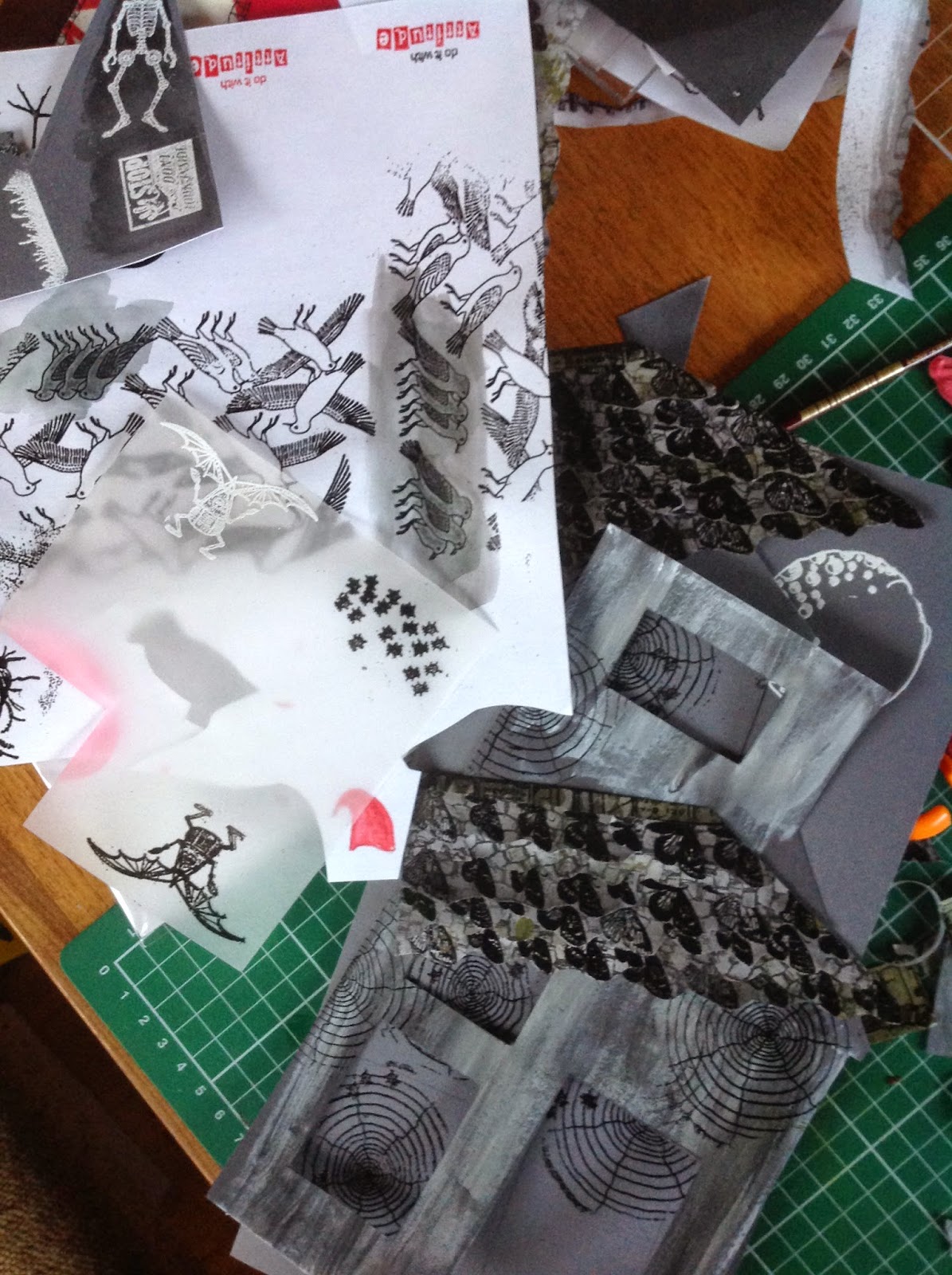 It looked an awful mess, but after piecing together the roofs and the inside scenes one by one it started coming together. The top window is full of grey birds, the middle one has "spiders" on vellum and the lowest window holds the frightfully large watchdog. The white skeleton in the doorway is hanging on a string. The last problem was building the shutters. I should have cut the window openings onto the front piece so, that the shutters and door would have been attached to their places. Now I had plain openings on my card, and with all the paints and inks on the pieces, they didn't want to stick. I ended up using washi tape and paper strips with glossy accents... and the shutters and door are stiff, so they wouldn't work as a calender like I originally intended, but look cool anyway. I am especially satisfied with the texture on the roof and little details like the small butterfly and skulls hanging from the edge of the roof. 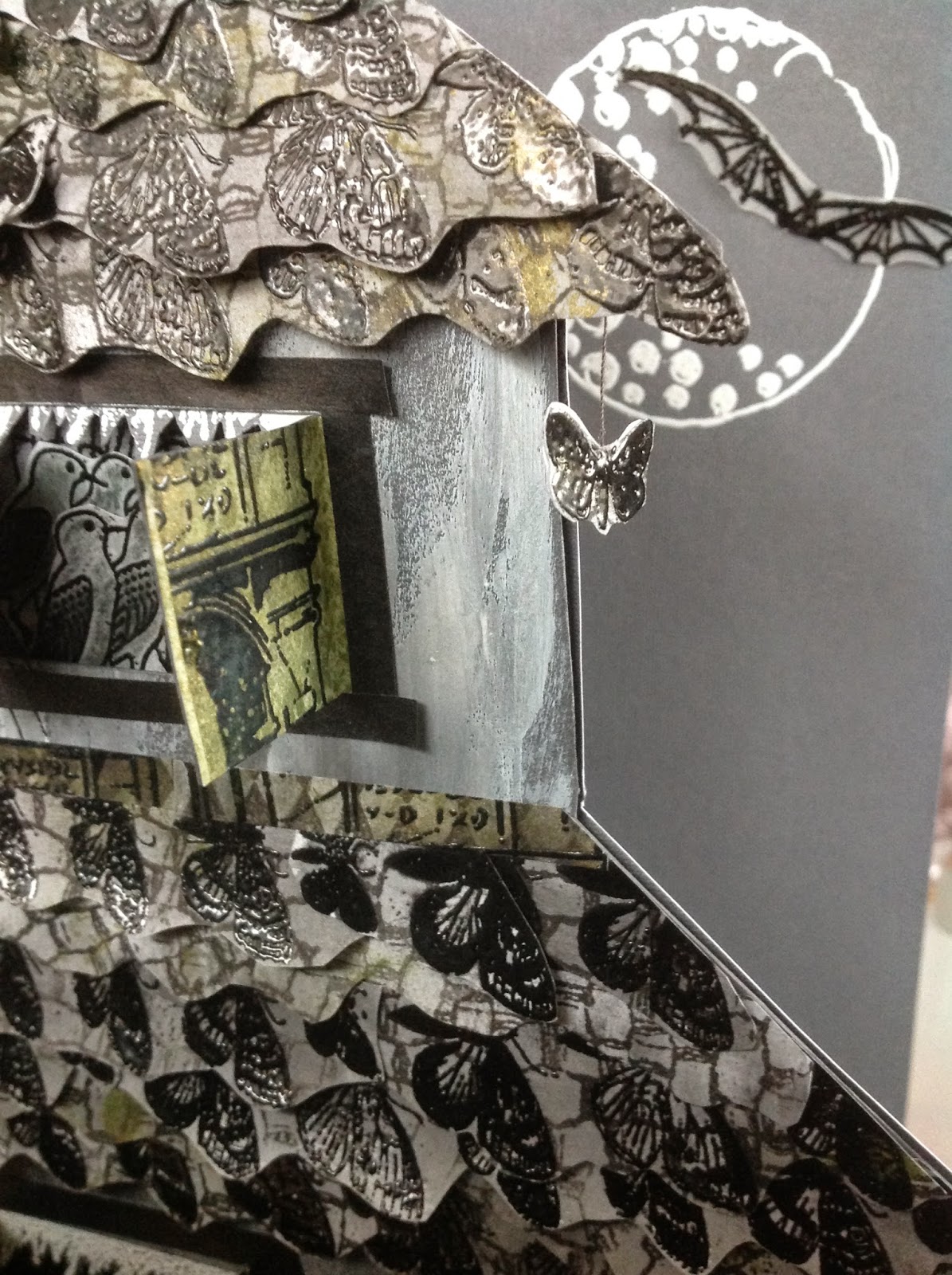 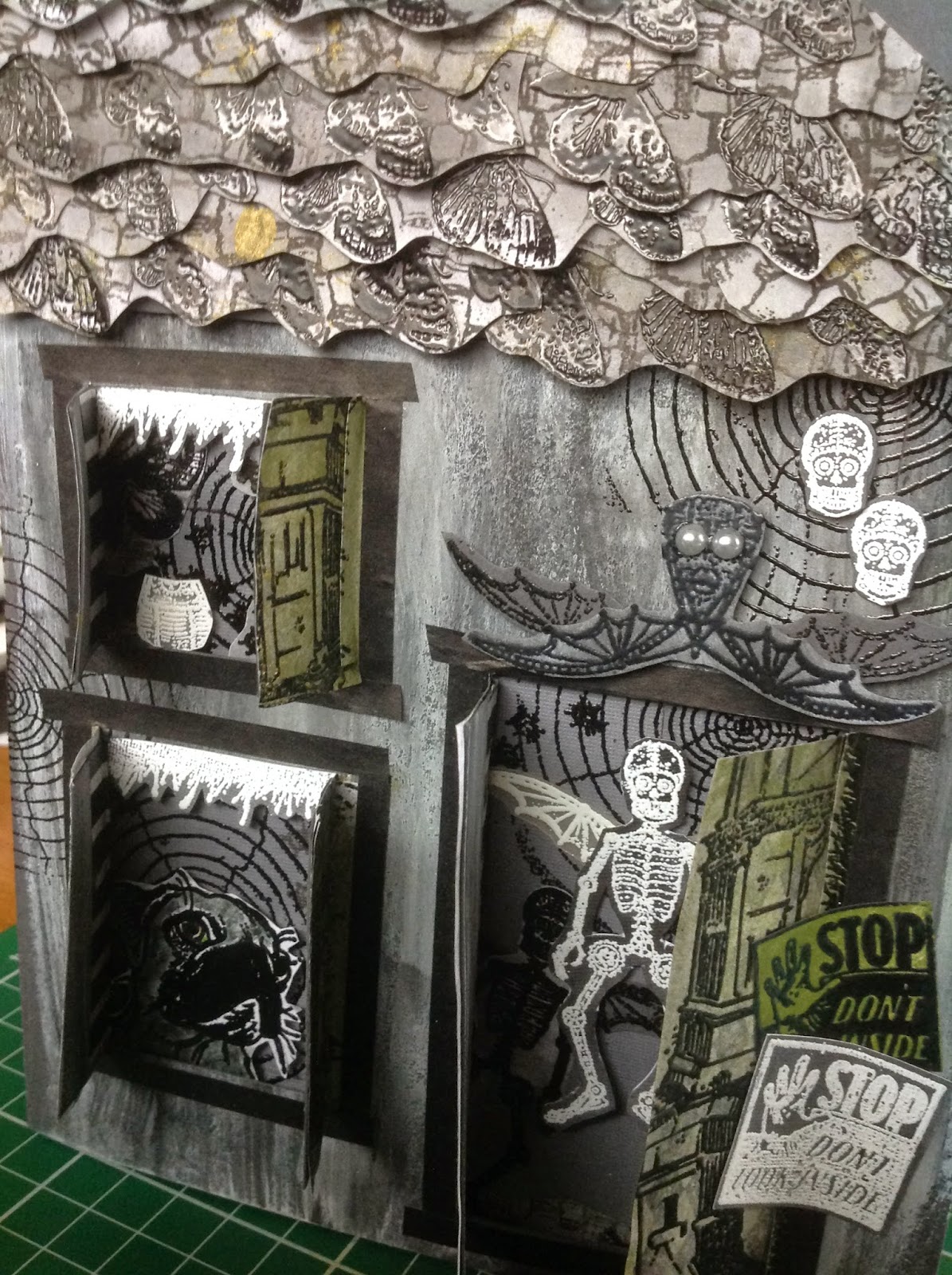 After getting the front done I sighed in relief -only to realize that I should give the inside some effort too!  The sentiment was built with an alphabet set from my stash and embossed in both black and white. The "scary" is from "life is scary without coffee", which I found in my grab bag. We will later add our greetings with a white pen. I wanted something black to stick out behind the house, and added blowing dandelions. It looks spooky enough embossed in black! I made several skeletons with bat wings, and added some inside. The rest I might use on tags or ATC:s. 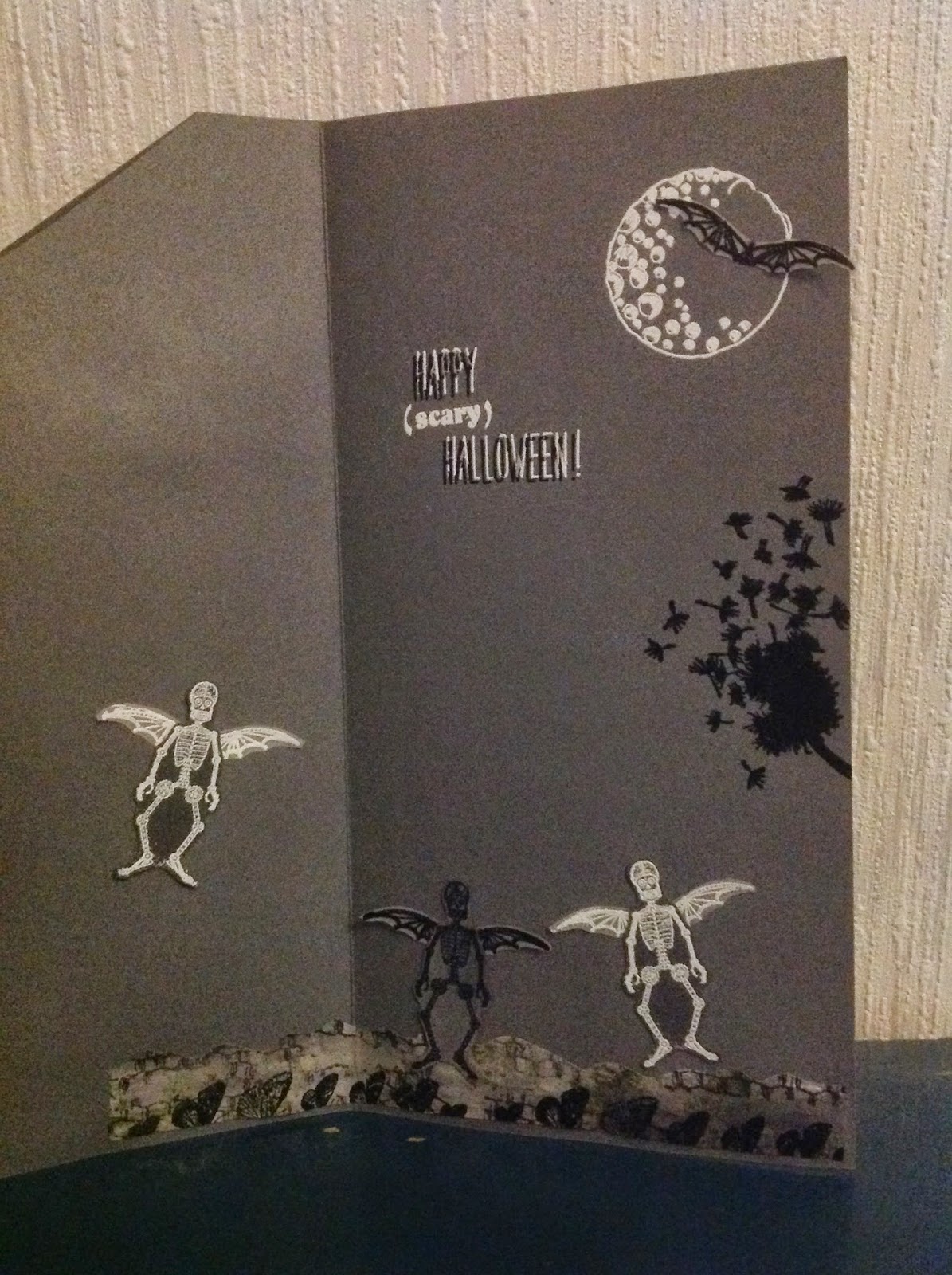 This was a time consuming but fun project that actually attracted my kids to my craft table too, since they kept wondering what I was up to! I'm quite proud to make it the first post on this (my first) blog!