The theme at Art Journal Journey is "nature's wonders" and I'm kind of playing with the flora part on this spread. We have lots of apples this year, and I spent the weekend cooking apple sauce... the snow last winter ripped the old tree in two and it's amazing that a half dead tree can push such a harvest! Since this well might be one of the last times it does so, I decided to use the apples in my journal too. It's quite a shame that I can so barely squeeze in time for a single spread per month, but that's the way life gets in the way every now and then. 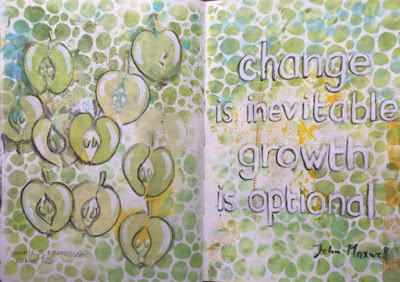 I had some yellow splats on the spread and used a spotty stencil to build up a leafy background. It is a bit restless, but that's my life. I tried stamping with an apple that I cut in half, but it really didn't show up, so I stamped on a piece of paper and cut it into a stencil. Sponged through the stencil, the apples were visible, and I continued with a charcoal pencil and some white highlights. ( The apples I've been busy with are a green/white colour ). I ran into this lovely sentiment the other day, and it of course fits for harvesting season! 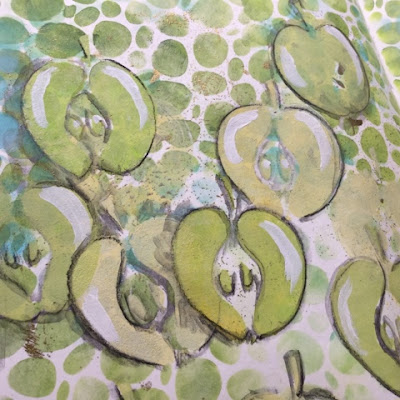 I have continued piffing up my daughters notebooks. These are A4 size (originally dull grey) and I've used acrylic paints, stamps and heavy gloss gel to decorate them... playing with the Paperartsy patterns-challenge. The stenciled gloss gel gives a subtle shine and texture that depends on where the light come from. 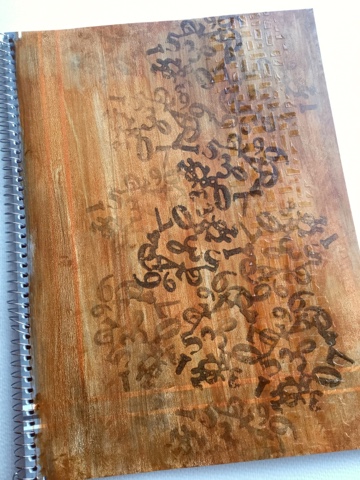 I really like this brown one, that obviously became a math notebook (wonder why?) That stamp from the Paperartsy Everything Art -series is just awesome. Also the blue notebook turned out the way I wanted... Well, the gloss gel stars looked gorgeous in milky white before they dried, pity I didn't use molding paste instead! 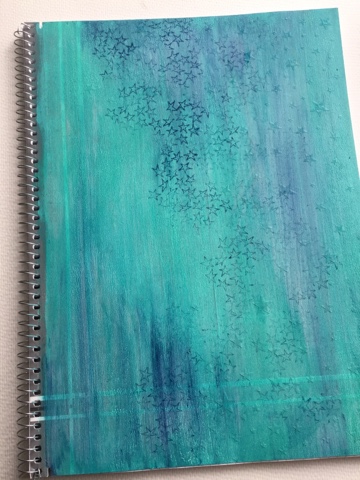 This yellow one ended up stressing me a bit. There is a layer of gesso under the paints, but it isn't opaque enough and the grey cover distorts the yellow. After stamping the colour wheels I heat embossed some texture with WOW pastel yellow. While heating the first one I realized bright yellow would have been much better... but I already had the pastel all over waiting for heat, so on I went. I random stamped some orange and added the circles with gloss gel. Again it looked fine when wet and milky, but as the gel dried, the pastel embossing was just too light. I used a white Sharpie to colour the gel and balance the palette. Not bad after all! Those colour wheels have a citrus touch to them :) 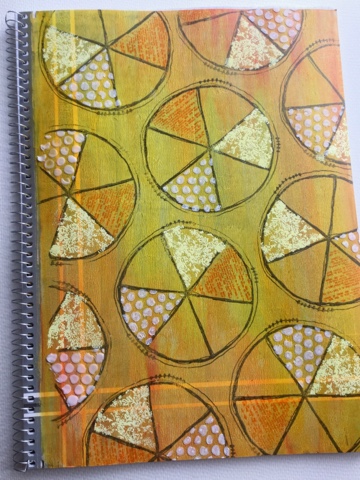 I decorated some matchboxes for the Lavinia Stamps challenge (no black). And since these contain matches, I'm also posting for the Simon Says Stamp Monday challenge (try to contain yourself). I picked a selection of Lavinia stamps... really loving the text, but the plants worked nicely too :) 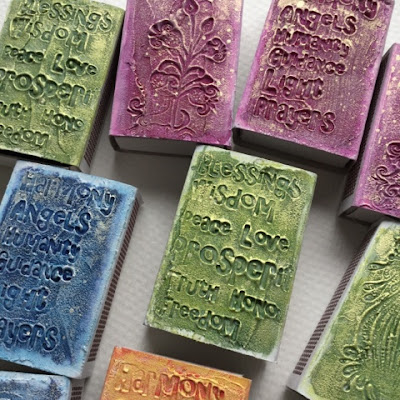 I have a tub of texture paste that is drying out, and I found it is quite nice to stamp into, no need to wait for the paste to partly dry, just straightforward stamping with water. Once the paste was dry I painted the covers with acrylic paints, starting with a dark colour and then dry-brushing with lighter shades to bring forth the texture. The final layer was Golden Irridescent Gold -paint. I guess the same effect could be done with a metallic wax. 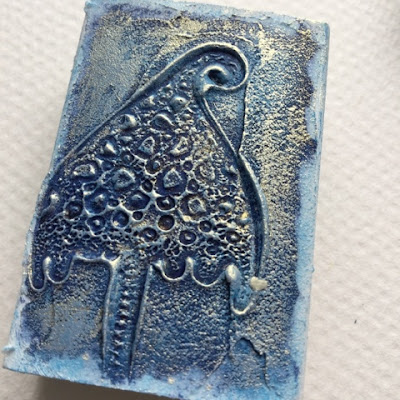 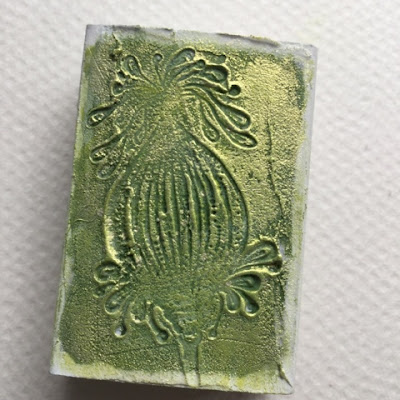 My daughter is starting high school, and that means we've been doing some shopping for school stuff. We picked some dull and inexpensive notebooks, and I decided to paint over the covers. Didn't ask my daughter for permission, but when she saw these, she didn't mind. So I guess I'll soon continue with the rest of the pile. I'm posting for the Paperartsy challenge (patterns). 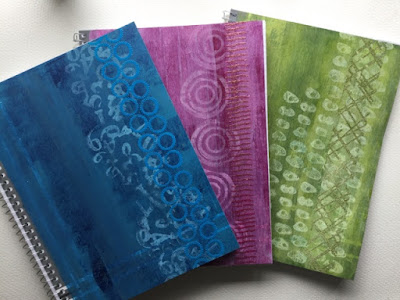 I simply brayered paints (Fresco Finish and Golden) straight on the notebook cover. Even though I used opaque fresco paints, the grey cover is showing through (it was quite slick). I guess I'll use some gesso for the next ones. To create some repetitive pattern I stamped Everything Art stamps with a lighter colour of paint and finished with some heat embossing using Ellen Vargo stamps and WOW embossing powders. For once I had good reason to use the more colourful ones! 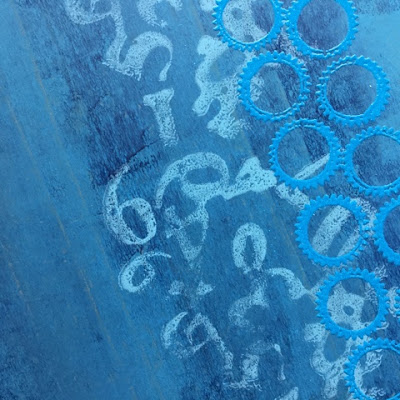 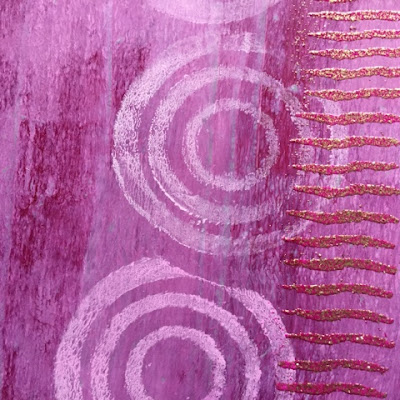 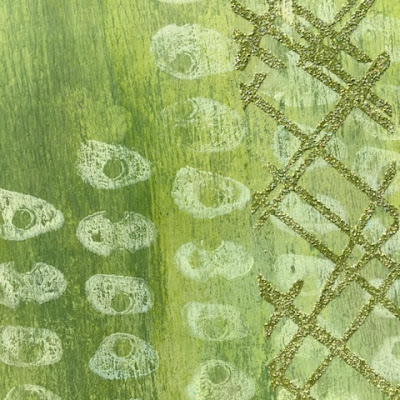 I've been playing with the wonderful gelli-printing technique Ellie Knoll showed on the Paperartsy blog: Acrylics combined with Infusions. My first tries used a brayer. I wasn't quite satisfied with the result, so I took out my 3x5 plate, smooched the paints around with my finger, misted, sprinkled, misted again... and I really love the prints I got. There was usually "too much" paint, which resulted in squishy prints, often even three in a row! As anyone who has done this knows, once you get started there's no end to it. I would have liked to go for a yellow-green colour scheme, but my cardstock pad ran out! Anyway, I'm linking to the Paperartsy colour mixing challenge, still 1,5 hours to go! 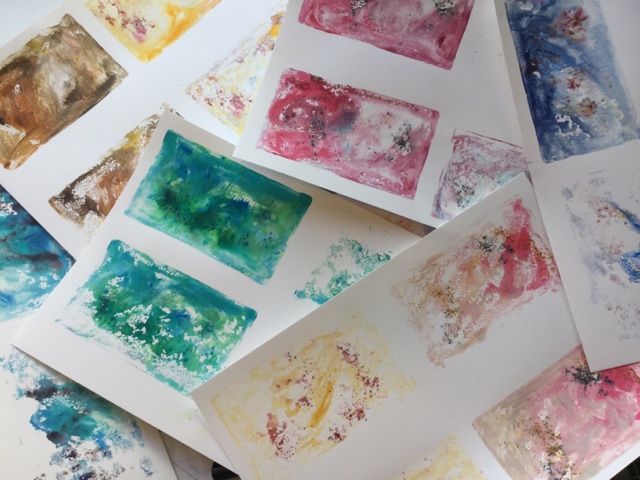 Here are some closeups of the smoochy texture combined with the resist effect that comes from the misted water on the gelli plate. I don't know what kind of cards these will end up as, but they do look nice...  I am kind of wishing I had the guts to print these straight on card bases... maybe next time :) 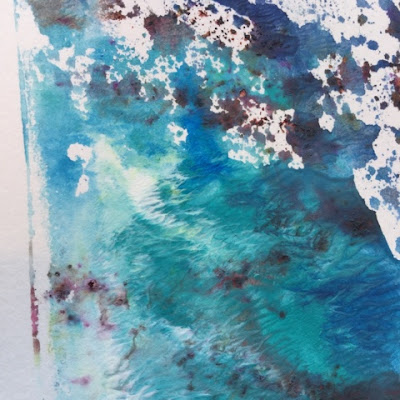 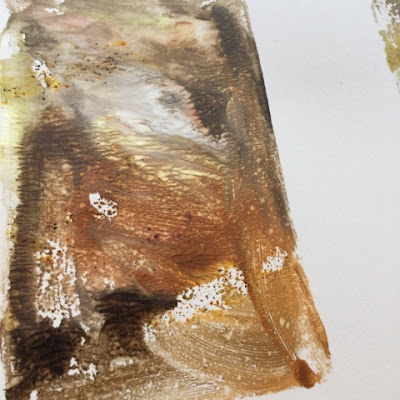 The Craft Barn alpha/dictionary challenge asked for C two weeks ago and Z with pearl today. I decided to get both done at once... It happens that both of these are rather difficult letters in the sense that neither is used in the Finnish language. I looked through the index of the wildlife encyclopedia I have been destroying for these cards, and found colocolo for the C and zokori for the Z. Not bad. Except that it turned out the colocolo has an optional name "the red-eyed opossum" which was the tag on the picture. Colocolo is only used in the definition text. The background is a piece of kitchen towel that has been used to mop Brushos :) 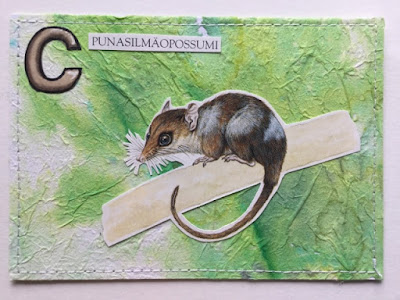 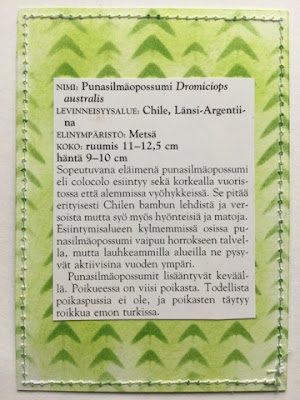 Actually I had several weird options for the Z. Zorilla was much cuter, but the picture was so large, it wouldn't have fit on the card, so I picked the zokori, which seems to be something like a chinese mole. At least it makes long tunnels, though it is a rodent and destroys roots of bushes and trees, which our insect-eating moles don't do. I am a bit sorry the rodent doesn't show well against the background, but of course it's dark underground and otherwise it suits the challenge: the embossing is WOW copper pearl, and will have to pass for the pearl twist. 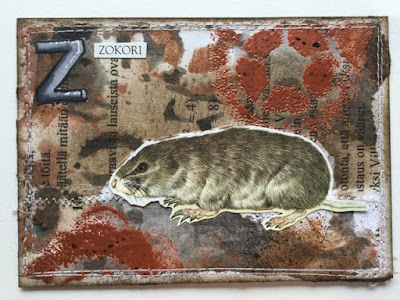 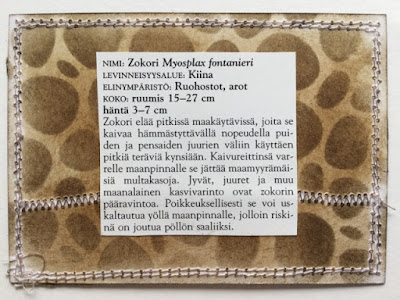 The Paperartsy colour mixing challenge has been an inspiration. I always lack nice greens, so after looking through Liz Borers lovely post with colour swatches, I wanted to try some greens. I'm a whole lot lazier, so I didn't go through all the shades, just messed around with my fingers, making a single blend of each yellow-blue combination. 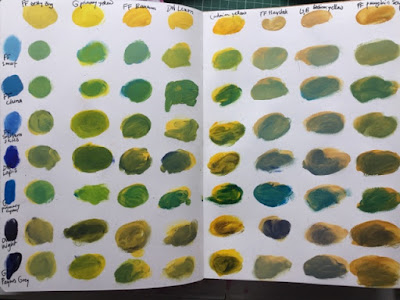 I picked all my yellow and blue acrylics... (Turned out to be quite a few) and used a spread in my art journal to blend them. It turned out that the Dina Wakley Night wasn't blue, more like purple, so that line gave only browns. In any case there are combinations with loads of lovely greens, I especially like the bright greens from China and Primary Cyan. Blending proved a bit difficult, because these dry so quickly. And my fingers were a lovely yellow/green/blue mess once I was done :) 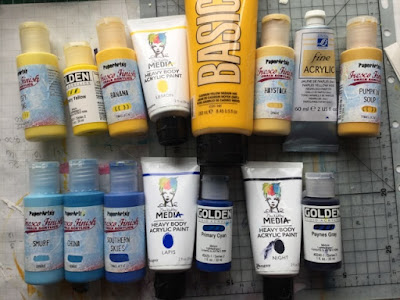 I should probably dedicate a whole art journal to different mixing activities. It would be so cool to know how to work forward from plain primaries and on the other hand to use all these ready-made blends in different creative ways. 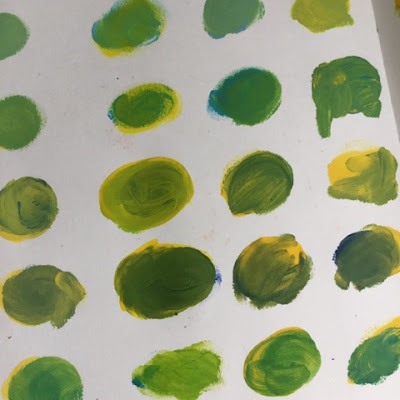 The Paperartsy challenge is asking for colour mixing. I just had to take out my gelli plate after looking at Ellie Knolls post. Couldn't wait to combine acrylics with Infusions, yay! I started with my 6x6 plate, brayered paint, misted, sprinkled Infusions, misted again... I had some trouble with the amount of water but got some nice 2.generation prints. This card is with the top right print. I used Pumpkin Soup and Snowflake + Sunset Beach... my previous print was the blue one, and I got touches of green when the blue leftovers attached to the yellow. And I still have quite a bunch to use for other projects... 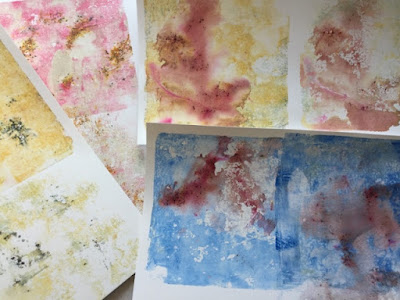 I stamped the Jofy flower on booktext and coloured with colour pencils. The "sentiment" is a bit of text that caught my eye as I worked with the flower (on the leftovers of the page after fussy cutting the flower). It says approximately

And in that way the combining of two phrases from the book results in a kind of mini poem. The flower and poem have foam tape behind them for a touch of dimension. 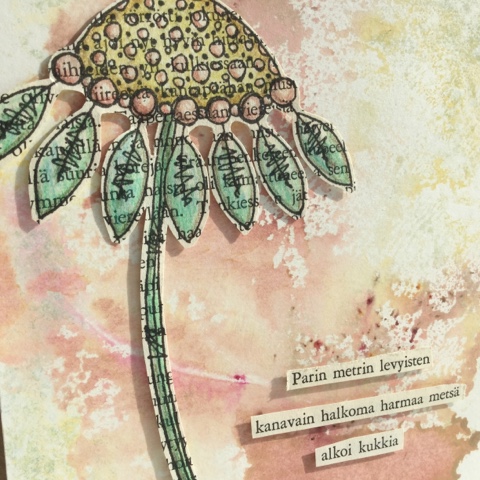