When I saw the Stampotique Designers challenge attachers topic (preferably playing Frankenstein with a Stampotique figure), I knew it would be a perfect match for this lovely sentiment that has been lurking in my mind waiting for a project. I decided on a black and white ATC, which I'm also posting for the Craft Barn weekly challenge (background text) and the SimonSaysStamp Monday challenge (anything goes). 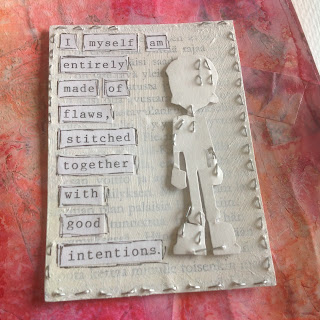 I stamped the heart boy image on a scrap of card and fussy cut him, after which I cut his neck and arm and started punching staples. The metal was barely visible, and I wondered what would become of it... and took a glimpse at the backside. I realized it looked quite cool: the ends of the staples were like stitches and the figure was nicely incognito without the details. I continued punching around him, liking the back more and more. 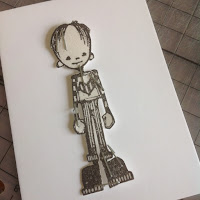 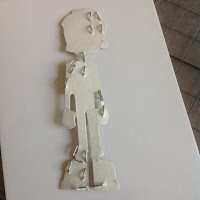 To add some interest to the ATC base I adhered some old book paper. I painted over with gesso, softening the page so my actual quote would be better visible. Besides, the text of the book has nothing to do with my theme. 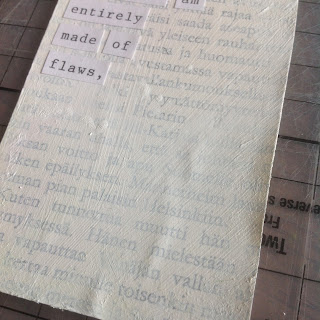 The quote was written with a typewriter and outlined after gluing down. I continued with my upsidedown staples around the card. It looks like the edge has been sewed with metal! To make the white boy visible on the white background (and because the staples added some bulk) I mounted him with foam adhesive. I like the way it gives a shade around the white on white image. And so it happened my black and white project became practically white! 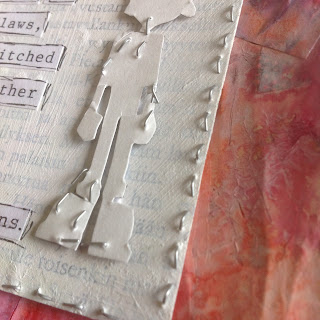