The Craft Barn calendar challenge is asking for lavender and dragonflies in June. I think this lavender colour is causing me problems... I've never really liked it as a colour, and that is perhaps the reason

I'm having trouble combining it with other colours. I ended up with green (once again). Adding the old bookpaper I have as a personal theme for this challenged caused extra problems colourwise. Besides the Craft Barn, I'm posting for the designs by Ryn customer creations challenge and the SimonSaysStamp Wednesday challenge (Anything goes). 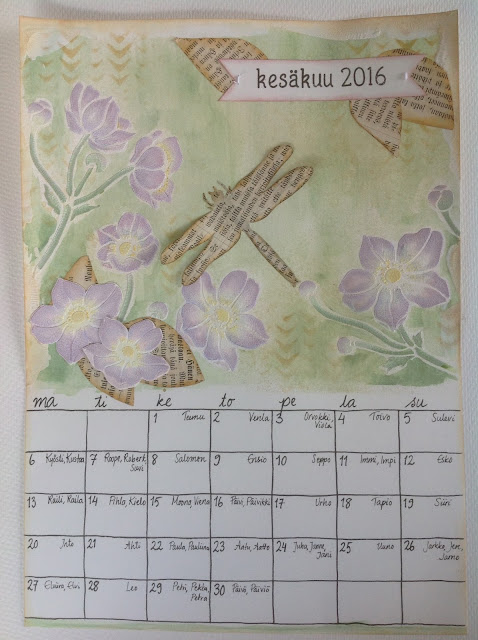 I started the page with the Designs by Ryn Anemone stencil and crackle paste. When the paste was dry, I painted the background with green mica-watercolour and used an ink blender to give colour to the flowers. The result was cute, but too neat to be combined with the old book paper, so I had to add grunge and brown shades. I used Tea dye -mist from Colorbloom here and there and a TH stencil with Brushed Corduroy ink. I also added some crackle paste to the edges of the page. I continued colouring the flowers with Distress markers. I found that the crackle paste made it possible to use lighter shades as blenders while working with the markers, kind of the way alcohol markers are usually used. Once the flowers were coloured, I added some Wink of Stella, which glimmers nicely. 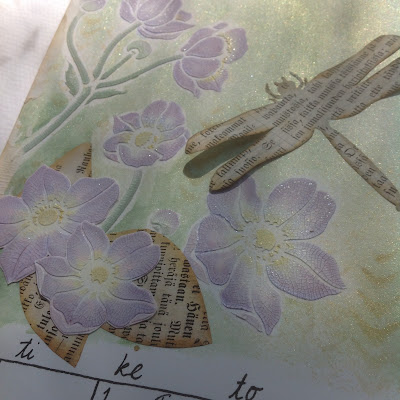 I really found myself wishing I had a stamp to go with this anemone stencil! To be able to layer some flowers I used a scrap of cardstock and built two extra flowers in the same way as the ones on the background, starting with crackle paste, ending with Distress markers. I fussy cut the flowers and adhered them to cover the empty corner. The dragonfly was stamped onto the book paper with a dragonfly stamp, but the black ink was too dark for this dreamy page. I decided to fussy cut it as intricately as possible (the book paper is so thin, it was not too difficult) and turn the image around so the stamping doesn't show.

The previous pages for this calendar can be found here:JanuaryFebruaryMarch
April
May
Lähettänyt Kristiina klo 13.19